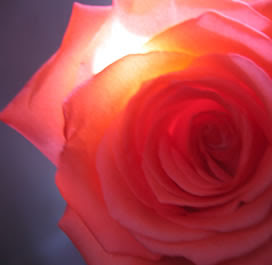 Years ago, I spent some time working as a groundskeeper at a beautiful garden estate in New Hampshire. It was a lush little plot of earth set right on the rugged New England coast, a stone's throw from the sea. Every day I'd drive the 'ole Chevy "Eurosport" Wagon (aptly named the Eggplant) down the winding ocean road to the gardens, to a place that was crammed with life: dozens of hybrid roses, delicate iris, a greenhouse packed with bougainvillea, cacti, ferns and flowers. The sea air was rich and fertile, pouring over us and into us from the Atlantic. The music of the waves was always soft and near. The irony was that in the midst of all this life, I was going through a kind of death.

It was a kind of "dark night of the soul." A deep fog surrounded me then, and life seemed suddenly like a pathless void. So, finding no clear path, I took to the soil. I tossed hay and trimmed roses. We hauled dirt and cut grass, kept the greenhouse green, and the plants well watered. It turns out the simple rhythm of the work in that rose garden was just what I needed. Sometimes I can think too much.

On the way home one day, I found a little church, coincidentally named for St. Therese, the Little Flower. It was right off the ocean road, just minutes from work! So I'd pop in time and again and lay my troubled heart on the altar. "Where am I going? What do I do now?" Things never got any clearer, but there was at least this daily act of the will to "lay things at His feet." Sometimes I think that's all we can do; like little kids with shoelaces all knotted up from running around, we go to Daddy to fix it. Some knots take longer to work out than others.

I see now His timing was perfect. I spent a few months with my brother, which was priceless. We had a rundown little apartment we jokingly named the "Palace," right next door to Sander's Fish Market. Right upstairs was the coldest, meanest old lobsterman you ever laid eyes on. He had his traps all over the backyard, never said a word to us. We called him "Mr. Happy."

Walks at night along the river between Maine and New Hampshire, to a pub for a pint or just out for fresh air, were so good for the soul. And our conversations were bonding. I'm so grateful for those days when the younger brother became the older. Looking back, there were lessons all around me. I was amazed to learn about the practice of trimming the rose bushes at just such a precise angle to prevent mold, or the covering of them with thick burlap when a chill was due. Don't we need to do as much, trimming our desires, and knowing when to conceal and when to reveal our hearts in the midst of this often cold world?

My favorite lesson might seem the most ridiculous. In the early days of spring, we covered those scented rosy beauties with..... horse poop. Now that's a fun job. What a parable there is in this one. Here's a flower famous the world over for its scent, and I'm putting horse poop at its roots? The lesson - Sometimes the stinky stuff is just what we need to help us grow. This puts a new twist on the experience of having a crappy day! Maybe we should actually wish for it! Any gardener will tell you that dark, smelly compost is so often what generates the most fertile, nutrient-rich soil. And horse manure for a good gardener is like gold... nuggets.

The question then, as we continue the Lenten journey: what's crappy in your life? What's the poop with you? Maybe it can turn into something efficacious? It depends on how we respond to the soil in which we're planted...
at March 16, 2007

I can understand how the "poop' in our life can be efficacious. It's only NOW that I can understand this, but it's very true. And you're analogy of the manure benefitting the rose bushes really targets it. But I think that as humans we have 'scent'-sitive noses and don't like the smell of the poop in our lives and run from it instead of thanking God for allowing us the opportunity(s) (of growth, etc.) that it provides us. Did you ever notice that the roses aren't bothered by the smell of the stimulant for them? They don't cry about it or run from it, but actually take it in their roots and allow it to become part of their growing process and are benefitted by it. How can it be that flowers can teach us so much about how to live more wisely?
It's also similiar to the plants that grow under the ground during the winter months in hibernation, then sprout in the spring with the warmer temperatures after they've spent some time in reflection. I think all of us need some of that hibernating spirit mixed with some poop in our lives! ... and rose bushes need someone to trim them back every once in awhile, just as we do, otherwise we can become wieldly, too.

Billy, I recall vividly this little corner of the world. It was, for me, a prelude to my own 'dark night' that would come only months later (and, in many ways, had already begun, even as we cooked out in Lorien the night before we drove to NH). I remember that smell of the fish market, that iron bridge on the border to Maine, that cramped little 'palace' (Calvin and Hobbes on the fridge), your car breaking down (HA! Remember that?!), and (the coolest part) singing along with you and Sean to 'China' by Greg Brown and 'Anchorage' by Michelle Shocked. Your departure from SCS(which was still fresh in my mind, even as we walked through that greenhouse) was ever-present in my own discernment. I have never forgotten those few days... or what I was thinking about, even as you yourself were searching.

Jim, those were the days... Talk about paradigm shifts and leaps of faith. It was the time for trust. Now I think we can look back and leaf through the book of our days and see how He was sculpting us, molding us into trusting sons. And boy it ain't over yet. Looking forward to touching base with you soon. On this day of Patrick and of Ireland, I'll lift a pint for you and a prayer for your intentions! Namarie!

by the way, I forgot all about that classic Anchorage by Michelle Shocked. A great spot of time there Jim, and I'm glad we could share it. Thanks...

"LEroy, says send a picture, LEroy says hello..!!" I still have that image of Sean driving and doing his exaggerated rendition of Michelle Shocked's song. Good, good, good spots of time. Namarie back. Though I'll be on watch tonight, I'll think of you and yours under the starry sky, and accept your lifting of the pint in my memory. We will cross paths soon.