Jesus, the X-Men, and My Boyhood Dream of Flying 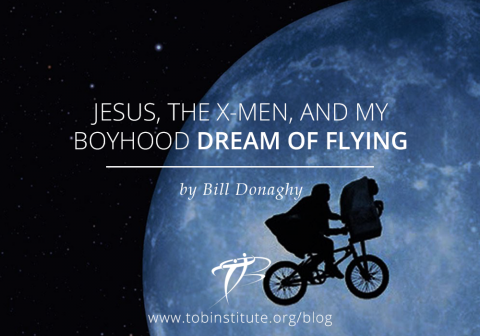 Flowing from the unprecedented joy and awe inspired by the resurrection of the Lord Jesus in this still ongoing Easter season of the Church, I’d like to take a moment to reflect on the five reasons why I believe Jesus was one of the original X-Men (If you are not familiar with the cultural phenomenon of the X-Men via graphic novel and blockbuster Marvel films over the last decade concerning people born with special powers, welcome aboard. It’s fun fantasy that I’m about to argue has roots in reality.) I will then proceed to ponder briefly the awesomeness of Reason #1, which we eagerly await to witness at the close of this Easter season; that is, his ascension into Heaven.

So, the five reasons why Jesus was one of the original X-Men…

1. He could fly.
2. He could pass through walls.
3. He could read your thoughts.
4. He could miraculously heal himself (and others).
5. He could change the molecular makeup of stuff into other stuff (water, wine)

Let’s spend the remainder of this reflection focusing on my personal favorite. Flying. When I was a kid I wanted to fly. I'm pretty sure I’m not alone in that desire. I think everybody has a deep-seated longing for the freedom of the birds, the freedom to simply lift off, float, ascend, sail away. From the Greek myth of Icarus to Leonardo's sketches of flying machines, to the Superman and X-Men modern mythologies, human beings have never been completely content as muddy-shoed bipeds.

When I first saw Superman in 1978, I wanted to fly like crazy. When I saw E.T. and watched Elliot and his alien friend cruise over the heads of those mean grown ups on his dirt-bike, my eyes were like saucers. I dreamt about flying across the moon on my sweet Huffy Pro-Thunder BMX Bandit with the star rims for weeks! Where am I going with this one? Excellent question! Give me a moment. I'd like to leave the cap off on this one for awhile; open, like the sky itself. I suppose there’s a part of me that doesn't want to bring closure to these youthful dreams. Adults are good at putting lids on things, limitations, caps and ceilings. “Now be realistic son. Get your head out of the clouds!” But isn’t that exactly where we last saw Jesus? And the clouds are the very place he said he’d come back through to take us home? C.S. Lewis once spoke about our desires in his powerful apologetic work Mere Christianity; “If I find in myself desires which nothing in this world can satisfy, the only logical explanation is that I was made for another world.” If we but give ourselves a moment to reflect on the wonderful, glorious theology of our bodies, we too will feel this longing for flight, for freedom, for a trajectory that takes us straight into the heavens! Body and soul.

Consider this: Jesus ascended bodily into Heaven, Mary was assumed body and soul. There are even stories of saints on this side of the eschaton levitating... sailing up to the rafters of a Church after receiving Communion, or even hearing the names of Jesus and Mary!

Why is our culture filled at the moment with so many movies about super heroes or supernatural beings that have amazing powers, from Spiderman to the X-Men, Superman to the Avengers? We give them the gifts we wish we had!

The animals don't dream like this! They’re satisfied with their lot. But we, made in the image of the Divine, are never satisfied. The truth revealed here is this; the animals are home, we are not… yet. In a certain sense, it's our home away from home. More accurately, we're exiled. The stuff of eternity is in us, and earth can't contain it.

Now I'm not saying we should try and fly, or levitate for that matter. St. Teresa of Avila, one of the Church's greatest "superheroines" (aka mystics), once hinted that she would rather have one normal experience to a thousand mystical experiences any day. She thought it too distracting for others I suppose, and the gift of her mystical experiences became a burden when people came for the show rather than for Jesus. That's humility!

Where did that power come from anyway? Not pride in their own skills, but from the LOVE they received deep into their very bones, their very DNA. The power lies in the theology of our bodies, written within as gift, and it fills us up like helium. Flight is not something we can master or muster at our own command. Love is free, and love is the fuel that gets us off the earth and into our eternal destiny!

“Beloved, we are God’s children now; what we shall be has not yet been revealed. We do know that when it is revealed we shall be like him, for we shall see him as he is.”
- 1 John 3:2

Let’s conclude with another thought from one of the greatest fantasy writers of his own generation, and one whose work still fires the imaginations of young and old today, C.S. Lewis:

We do not want merely to see beauty, though, God knows, even that is bounty enough. We want something else which can hardly be put into words — to be united with the beauty we see, to pass into it, to receive it into ourselves, to bathe in it, to become part of it. That is why we have peopled air and earth and water with gods and goddesses and nymphs and elves — that, though we cannot, yet these projections can, enjoy in themselves that beauty, grace, and power of which Nature is the image. That is why the poets tell us such lovely falsehoods. They talk as if the west wind could really sweep into a human soul; but it can't. They tell us that "beauty born of murmuring sound" will pass into human face; but it won't. Or not yet. For if we take the imagery of Scripture seriously, if we believe that God will one day give us the Morning Star and cause us to put on the splendor of the sun, then we may surmise that both the ancient myths and the modern poetry, so false as history, may be very near the truth as prophecy. At present we are on the outside of the world, the wrong side of the door. We discern the freshness and purity of morning, but they do not make us fresh and pure. We cannot mingle with the splendors we see. But all the leaves of the New Testament are rustling with the rumor that it will not always be so. Some day, God willing, we shall get in.
- C.S. Lewis, The Weight of Glory

Originally posted on the Theology of the Body Institute blog: http://www.tobinstitute.org/2015/04/24/jesus-x-men-my-boyhood-dream-flying
at April 24, 2015 No comments: