Let Us Make God in Our Image, After Our Likeness 'Cause It'd Be Awesome 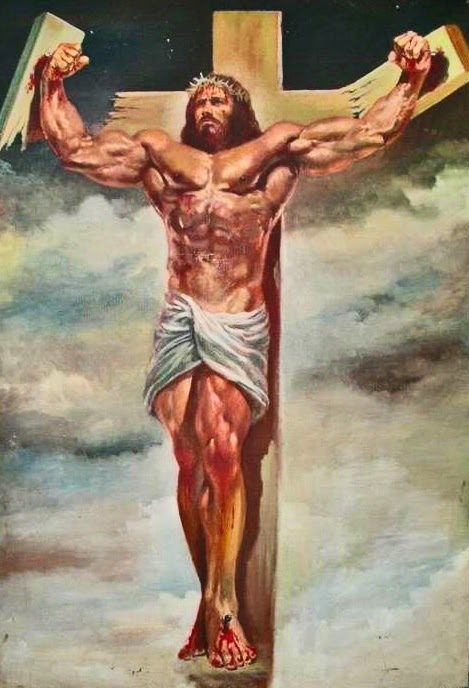 This might hurt your brain, but stay with me friends.

Imagine if he came the way we wanted him to? Imagine if Jesus answered the problem of evil with a punch rather than his paschal mystery?

He would've kicked the devil's butt. He would've been ripped, with muscles on top of his muscles. A combination of brains and brawn. Bolder than Bourne, slicker than Spider-Man, more convicted than Captain America and every move in slo-mo. The lance set to pierce his heart on the Cross would've bounced off and snapped like a toothpick! Nothing would break him. He'd have busted up the Romans and religious leaders in a Divine Smackdown the likes of which the world had never seen!


Yes, if God were made in man's image... we'd all be wowed, then bored to tears.

"That was awesome! What else is on?”


I saw the latest X-Men film this weekend, and it was awesome. Don't get me wrong, Rebecca and I will be watching this chain of films until we're 90 (because they'll still be making this franchise when we're 90)! Lots of fun, lots of flash and fireworks, classic good versus evil (though the characters are getting morally foggier these days, aren't they?) and then the credits rolled. Fade to black until another new translation of the same old, same old throws its glowing flashes on our sedentary faces. (There was a remarkable and refreshing gem in this X-Men film though.... wait for it ;)

Last night's movie, scheduled as a 9:10 viewing, didn't actually start until about 9:30. It was preceded by 20 minutes of previews. Most of these were coming attractions for the same perennial distractions. Stuff blowing up, slow motion acrobatics, killing, fighting, quelling evil forces with opposite force, which then ushers in a fragile peace until the sequel. Now, what I find reassuring as a "theological anthropologist" (my unofficial job title) is the recognition that bad needs to be broken. We must fight evil and rescue that which is good. This is a theme so deeply engrained in our stories. But "making right" has a better word and a more effective one than the firing of bullets; it's redemption.


This word changes everything. and it all goes back to that paradigm shift when Christ first hit our "fault line" with the tectonic shift of gratuitous grace. Those aftershocks still reverberate throughout human history, backwards and forwards. Our realignment comes now by our allowing ourselves to be set into this new geographic configuration by faith, not fists. Retaliation and redemption are two very different answers to the problem of evil.

Point is this: There must be a fight. There will be blood. There must be. To quote the Princess Bride for the thirteenth time on this blog, "Life is pain... anyone who tells you otherwise is selling something." But it's all about what we do with the blood and pain and suffering that comes from that first punch.

The amount of blood and violence and suffering in our blockbuster movies today is staggering, but honestly it's no more staggering than the battles and death in the Bible, especially, uh, the crucifixion. In this latest X-Men film, however, a powerful twist enters in and truly redeems suffering in a beautiful way. 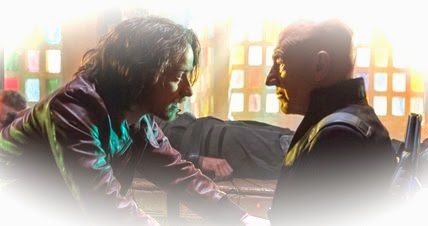 In a climactic scene (slight spoiler alert here) between young Charles Xavier and old Charles Xavier, we receive a pearl of wisdom on how to treat our "enemy"... how to open up to a peace that just might have the power to stick, finally, after so much fighting;


"The greatest gift we have is to bear their pain without breaking and it comes from your most human part, hope."

Wow. The scene has so much more to it, but I want you to go and taste it for yourself.

So back to Jesus... who is the quintessence of this kind of compassion (which means to suffer with).

Recall he came the way the Father wanted him to. He answered the problem of evil not with a punch, but with his paschal mystery. He took the punch, and let it penetrate him (literally in fact break him), through and through. "Rather, he emptied himself, taking the form of a slave... becoming obedient to death, even death on a cross." (Philippians 2:7-8)

This is the "movie" that continues to truly move me. And with an ever building sense of joy and Easter hope, all the while trying to unite my own personal small bit of suffering to his, I'm looking forward to the sequel!

"In the world you will have trouble, but take courage, I have conquered the world.”
- John 16:33