The Posture of the New Evangelization 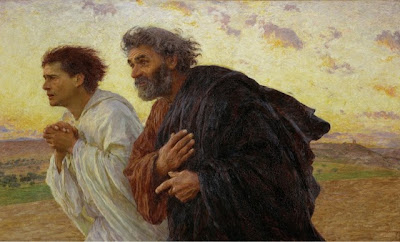 This month's Sacred Art meditation is a real gem from the Swiss painter Eugene Burnand (1850 - 1951). He began his studies in his native Switzerland then moved to Paris, where he became best known for his landscapes. Influenced by the realism so vibrant in that period, he also had a gift for capturing human emotion. It's evident in his famous work, “The Disciples Peter and John Running to the Sepulcher on the Morning of the Resurrection.” Let's do a little "Video Divina" on this image (which is the visual equivalent of Lectio Divina. Divine "Seeing." Gaze. Look. Enter in. Feel the "sacramental" presence of God (in a certain sense) through the canvas and the paint).

We see John with a face still fresh and young, but weathered by the events of the past three days. Anxious concern etches his brow, and his hands are clenched with a tremulous expectation. Peter, more rugged, bears a fisherman's face. It is sea-swept and soaked by his own salty tears from Thursday night's bitter betrayal. His eyes are wide open, dilated with hope.

This Resurrection scene does not put us before still figures near a stagnant stone, nor figures standing with stony faces in a contrived, plastic posture, pointing to an empty tomb. This scene is dynamic; we are in motion. We are full of a host of wild emotions: fear, concern, hope, wonder, and pregnant joy on the verge of giving Life to a world waiting so long for One Who could "undo" death. And He has done it! His New Light shines already on their faces, and on the world's edge in glimmering golden-edged clouds.

This painting must be our posture for the New Evangelization, but renamed as we now are "Running FROM the Sepulcher on the Morning of the Resurrection.” What we are taking along for this journey is just what The Lord commanded: our own hearts, impressed by the power of this Love that we've encountered, awash with the Mercy of the Father and the light of the Son, filled with the enthusiasm of being able to name and claim that ache within all of us for meaning and purpose and Love. He is risen and through Him, with Him, and in Him, so are we! This is what we must bear witness to, not only in the preached word but in art and music and film, poetry and dance and most especially, through the sculpted masterpieces of our own unique humanity.

Bill Donaghy is an instructor and speaker for the Theology of the Body Institute. Bill holds an Associate's Degree in Visual Arts and received his Bachelors in Philosophy and a Masters in Systematic Theology from St. Charles Borromeo Seminary.
at July 11, 2013 1 comment: