To Be Inspired and Inflamed


This July 9-11, there will be a gathering in historic Philadelphia, PA, of renowned experts and enthusiasts on the incredible thought of St. John Paul II. He devoted the first major teaching project of his pontificate – 129 short talks between September of 1979 and November of 1984 – to providing a profoundly beautiful vision of human embodiment and erotic love. He gave this project the working title “Theology of the Body.” Far from being a footnote in the Christian life, the way we understand the body and the sexual relationship “concerns the whole Bible” (TOB 69:8). It plunges us into “the perspective of the whole Gospel, of the whole teaching, even more, of the whole mission of Christ” (TOB 49:3). Christ’s mission, according to the spousal analogy of the Scriptures, is to “marry” us. He invites us to live with him in an eternal life-giving union of love. The repercussions of this teaching, in essence of the Gospel itself, are boundless, touching every person in every walk of life with the positive, hope-filled joy of the Gospel that truly sets women and men free to love. Our three days together in July includes:

• Sharing and collaboration between key Theology of the Body leaders, catechists, Church leaders and teachers from around the country;

• Catholic vendors specializing in Theology of the Body-related products;

• Eucharistic adoration, reconciliation, and daily Mass celebrated at the Basilica Cathedral of SS Peter and Paul

The Pope Saint and Fatima 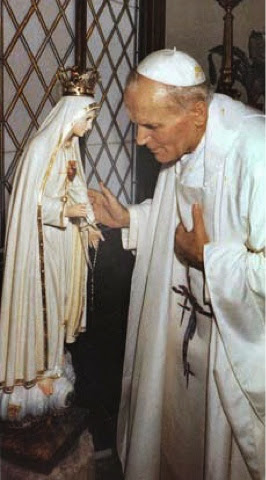 "May 13, 1981 was a typical Wednesday in the Vatican. As was his custom, John Paul invited guests for lunch, hosting the renowned French geneticist Jerome Lejeune and his wife to discuss Natural Family Planning and other pro-life matters. After the usual course of afternoon meetings and prayer, he descended to Saint Peter's Square to participate in his weekly Wednesday audience with the faithful. He was approaching the halfway mark of his lectures on the Theology of the Body.

He climbed aboard the Popemobile and crisscrossed through Saint Peter's Square, kissing babies and blessing the 20,000 pilgrims who had gathered to see him. At 5:17 P.M., moments after blessing a two-year-old girl and handing her back to her elated parents, blasts from a 9mm semiautomatic pistol rang out. Pigeons throughout the square scattered skyward as John Paul fell backward into the arms of his secretary, Monsignor Dziwisz.

One bullet fractured two bones in his left index finger and passed through his abdomen before exiting through his sacrum and coming to rest in the Popemobile. Another bullet grazed his right arm, and two American women in the crowd were injured. His assailant, Mehmet Ali Agća, was a trained twenty-three year-old Turkish gunman who had been incarcerated for murdering a journalist. Three days before the Pope's visit to Turkey in 1979, Agća escaped from an Istanbul prison and sent a letter to the Turkish newspaper Milliyet, stating that if the papal visit is not canceled, "I will without doubt kill the Pope-Chief. This is the sole motive for my escape from prison."

Although the Istanbul daily paper printed the letter on its front page, John Paul moved ahead with his plans and safely made his apostolic pilgrimage. However, Agća was determined to follow through on his threat. He arrived in Rome two years later, on May 9, and stayed at the Pensione Isa hotel, a fifteen-minute walk from the Vatican. Over the next few days, he examined Saint Peter's Square and developed his strategy for murdering the pontiff. After the assassination attempt, police searched his room and discovered a note that declared, "I have killed the Pope."

After the gunshots were fired, the Popemobile fled the scene and John Paul was transferred into the familiar ambulance. Dziwisz climbed beside him and could hear him praying, "O Maria, Madonna! Maria, Madonna! Mary, my Mother..."

In Saint Peter's Square, as the faithful were praying for his survival, a group of Polish pilgrims took an icon of Our Lady of Czestochowa and placed it beside the empty seat that the Holy Father would have sat upon during his audience. A gust of wind blew it over, and a bystander noticed the inscription on the back of the image, which had been written days or weeks earlier: "May Our Lady protect the Holy Father from Evil."

After healing, John Paul desired to express his thanks to the Virgin Mary for protecting his life. He took one of the bullets that struck him and gave it to the bishop of Fatima, who placed it among the gems in the crown of the statue of Our Lady of Fatima.

Several biographers have noted that it was a perfect fit. Uno Zani explained, "To everyone's surprise, it was not even necessary to make a place for it, because there was already a hole in the crown into which the bullet fit perfectly, as if it had been designed that way."

In Saint Peter's Square, he installed a mosaic icon of the Virgin Mary with the Christ Child, overlooking the Papal Apartments, with the words of his motto, Totus Tuus, inscribed beneath it. The image was installed in remembrance of the assassination attempt, but it also filled a need that the Pope realized before the attempt on his life occurred: of all the statues that surround Saint Peter's Square, there wasn't a single image of the Blessed Mother."