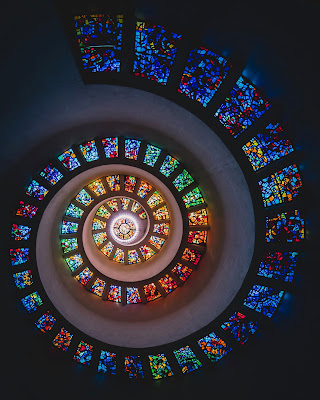 If they knew how big they’d become on the music scene, lead singer Ben Gibbard of the band “Death Cab for Cutie” once confessed, they would’ve thought twice about picking that obscure name. In these days of an even deeper obscurity over what gender we identify as, I’d like to reflect on one of my favorite DCFC’s songs “Soul Meets Body.”

From their album, Codes and Keys, released in May 2011, “Soul Meets Body” soars as an achingly beautiful song with echoes of the original plan of God for humanity, despite Gibbard’s apparent religious “wound” in other songs of the band. It begins…

I want to live where soul meets body and let the sun wrap its arms around me and bathe my skin in water cool and cleansing and feel, feel what its like to be new

I always thrill at the hearing of songs like this in popular music, from bands not necessarily religious. It points to that universal thirst for a harmony between flesh and spirit that can be found everywhere, in everything. Musicians today are scratching out their notes in the cynicism of a post-Christian age, amid scandals and hypocrisy, and even radical doubts and attacks on not only God’s identity but now our very own. In this quest for meaning, I find a certain raw sincerity in Death Cab for Cutie (DCFC). It shows us that nothing can snuff out the desire for the truth about God and man, not even a poor first experience of religion, or the scandalous example of some believers. It seems a wound from the past shaped lead singer Gibbard’s vision of the Catholic faith he was raised in. It’s revealed in the song “I Will Follow You Into the Dark”:

In Catholic school as vicious as Roman rule I got my knuckles bruised by a lady in black and I held my tongue as she told me “Son, fear is the heart of love” So I never went back

This experience is beyond tragic, since we know St. John tells us “perfect love casts out all fear.” (1 John 4:18) The wounds of an earthly father can change our view of the Heavenly Father. The sins of a school master can alter our knowing the love of the Divine Master. I wonder how effective this teaching of fear of punishment might be for the young as an introduction to God. Yet it seems to be a part of our pedagogy, individually and universally. Dr. Karl Stern, a Jewish psychoanalyst who converted to Catholicism once wrote: “The child receives, even before any formal moral training, a kind of ‘natural’ premoral formation. Its first encounter with a world of regulations is predominantly negative. The world of the forbidden precedes the world of the ideal. The very first regulatory education, such as training for order and cleanliness, warning against the handling of breakable objects and so on, may signify to the child an initiation into dread. Even under the most favourable circumstances the child gets to know the ‘Don’t’ associated with the first notion of punishment and reward, of retaliation and pardon, before a positive ideal, a ‘Do!’, can develop… It is the same in the child’s life as in the history of human society. Something analogous also exists on the level of the historical drama of salvation.” (Stern, Flight from Woman, 1965)

Now ponder this thought of Pope Benedict XVI: "Our first experience of God is so important; we either experience Him as the police guard ready to punish or as creative love that awaits.” Creative love is what we long for, and in fact it’s what God wants to pour out over our hearts through the Church’s sacraments. Sadly for many of us, the individual pieces of the conduit this truth can flow through (namely fallen human beings) can often limit or even obstruct that flow of truth. But that’s our fallen human nature, not the Divine water of grace (which by the way, always finds a way in). Gibbard sings that he “never went back” to the Catholic Church (he refers to himself as an “indoctrinated Catholic even though I haven’t been to church of my own volition in 10 or 15 years now.” But not going back doesn’t mean he’s not in some way moving forward in his quest for the truth of who we are. The French philosopher Simone Weil wrote that even when we run away from Christ, if it’s toward what we consider true, we run in fact straight into His arms!

Now away from the personal to the more culturally expansive seeking for healing in our world today. Our gender dysphoric age gives us an ever-expanding list of letters with which to identify. LGBTTQQFAGPBDSM and the list goes on, becoming every day increasingly more and more obfuscating. Recall Jesus asking the possessed man his name and the man replied “Legion is my name. There are many of us.” (Mark 5:9) This fracturing of our personhood, soul from body, is nothing new. It’s simply an attempt to cloak our ever present wound; the age-old identity crisis we’ve suffered from since the Fall in Eden. We are a splintered race, racing along, seeking reunion, and communion, of our hearts, minds, and bodies. Our identity has been disintegrated and our hearts dispossessed of the integral truth of what it means to be human, soul and body. But we must keep digging, seeking our original face. The ancients termed it fides quarens intellectum – faith seeking understanding. And we do this together as the song sings, for we need a reunion of not only soul and body, but of person to person, and God and humanity:

This digging deep into life’s experiences, and origins, can reveal hidden treasures. In the music video for “Soul Meets Body”, which I highly recommend watching (https://www.youtube.com/watch?v=uizQVriWp8M), we see a host of musical notes peeping out of the earth from a darkened forest floor as Ben Gibbard walks past. He meets his band in a little cabin and they play their song. We watch the notes rise up from the ground and through the canopy of trees, over forest and field, past houses and towns and cities, to the sea.

Listening to the ache for meaning can itself reveal to us the meaning. If we listen to the Music that made the world and follow those first two notes, the masculine and the feminine, that first came together to form the song that is our own personal life, our story, we see, hear and experience our place in the Song. The Song is the vocation of the human person, synthesized in St. John Paul II’s Familiaris Consortio: “God inscribed in the humanity of man and woman the vocation, and thus the capacity and responsibility, of love and communion. Love is therefore the fundamental and innate vocation of every human being.” (FC, 11)

Caryll Houselander wrote “We are all syllables of the Perfect Word.” We are more than a single letter, we are the beginning of an utterance of a Fullness, a fullness we are already but not yet experiencing. So let’s keep going, aching, coming to terms with the truth that we are made for the other. Ultimately, our utterances must keep going up, into that Perfect Word Who encompasses and surrounds and unites all of us! In His Love that satisfies that original harmony between soul and body, the spiritual and the material, man and woman, and all of humanity is realized. There is a Creative Love that awaits in the Heart of Jesus, in the ocean of His mercy. Yes, even despite the oil spills of humanity’s sins, He’ll wash one another in this mercy, “and not one speck will remain.”

And I do believe it’s true that there are roads left in both of our shoes but if the silence takes you then I hope it takes me too. So brown eyes I hold you near cause you’re the only song I want to hear. A melody softly soaring through my atmosphere… Where soul meets body…
at June 12, 2017 No comments: